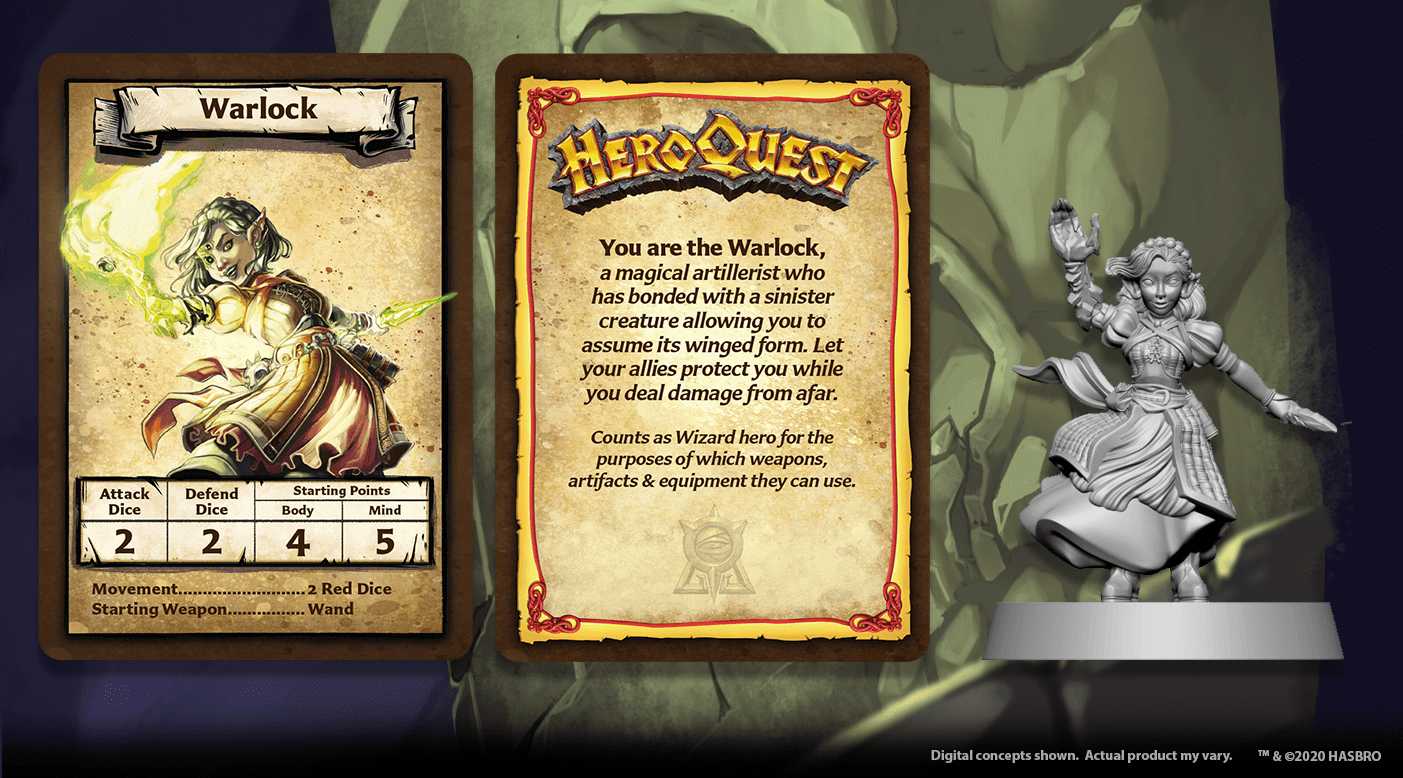 When I design new HeroQuest heroes, I want to bring new elements to the table but not overshadow the iconic original four. Shauna Nakasone’s art features a Warlock showing visual signs of the sinister entity that lives inside them. I wanted our Warlock to be fearsome and scary, and make use of the winged creature they are a host for as they quest. I’m intrigued with the idea that there is a condition that would allow you to recover a spell – for example, Demonform for this hero – that you have already cast.

You are the Warlock, a magical artillerist who has bonded with a sinister creature allowing you to assume its winged form. Let your allies protect you while you deal damage from afar. Counts as Wizard hero for the purposes of which weapons, artifacts, and equipment they can use.

The Warlock’s statistics and equipment are comparable to the Wizard’s. But the Wizard excels in utility, with nine spells they can call upon. Our Warlock is more of a focused ranged damage-dealer.

This wand gives you the attack strength of 2 combat dice against any monster you can “see.” A Warlock may purchase a new wand for 125 gold coins.

This weapon allows our Warlock to attack at range. In addition, the wording of the gold piece value of the wand works to prohibit other heroes from trying to purchase it for themselves. This object should be unique to the Warlock.

Regain this spell when you reduce an monster's Body points to zero.

This spell causes any one monster to become so fearful that their attacks are reduced to one combat die. The spell can be broken on a future turn by rolling one red die for each of their Mind Points. If a 6 is rolled, the spell is broken.

Cast this spell on an enemy’s turn after you have suffered damage. Reduce that damage to 0 and move instantly to any unoccupied square you can "see."

I wanted these spells to reflect the self-serving nature of the Warlock. Nothing here directly helps your allies. The Warlock focuses on escaping trouble long enough to remove monsters from the board and they are rewarded by recovering their Demonform spell for doing so.

What do you think? Cast the Far Voice spell and let us know… or just tweet us @HeroQuest