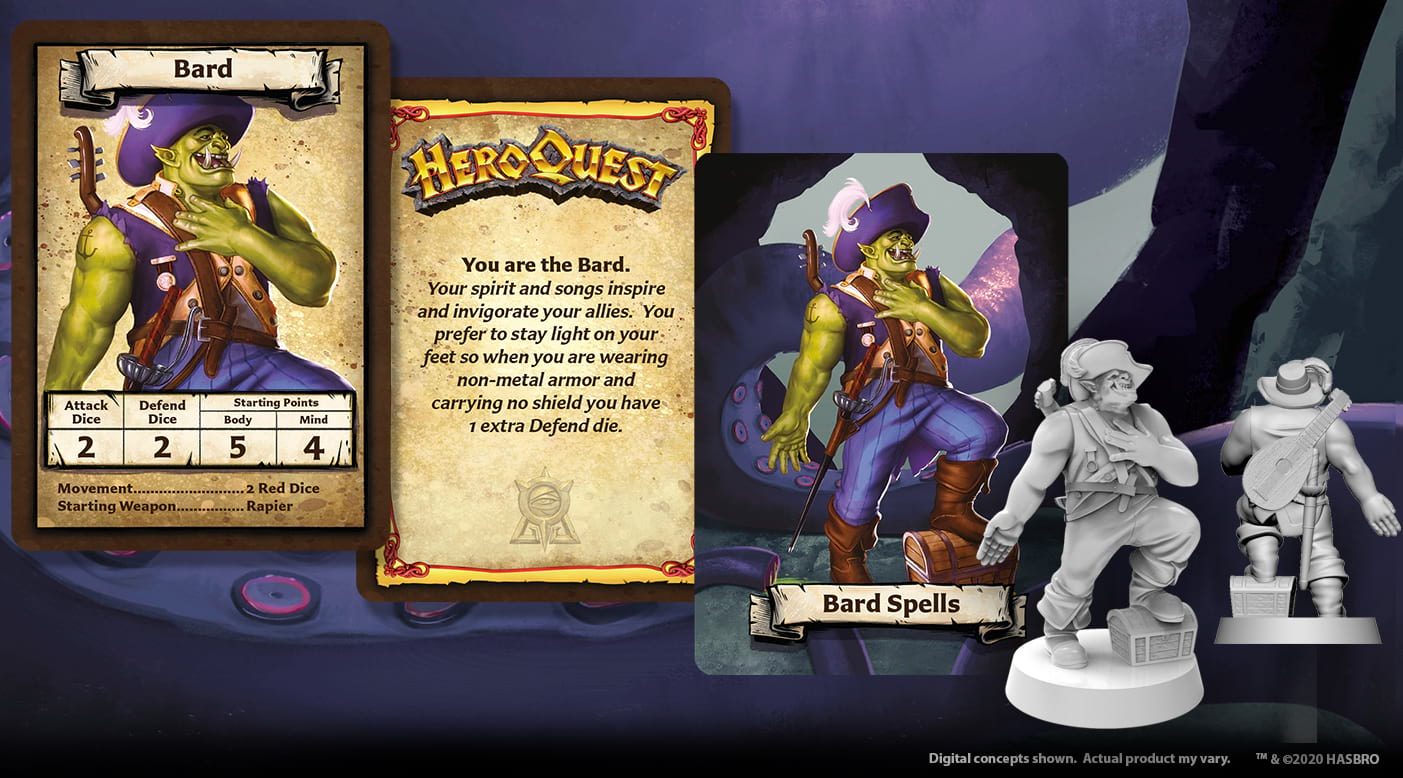 The inspiration for this Bard was a swashbuckling orc hero. A team player who will propel the other players to victory. As with the Warlock and Druid, there is a condition that will allow you to recover a spell –Inspiring Tale for the Bard – that you have already cast.

You are the Bard. Your spirit and songs inspire and invigorate your allies. You prefer to stay light on your feet so when you are wearing non-metallic armor and carrying no shield you have 1 extra Defend die.

The Bard’s statistics and equipment are comparable to those of the Elf. While the Barbarian, Elf, and Dwarf might end up with plate mail and shields later in the game that doesn’t feel right for our Bard. I wanted to incentivize the Bard to follow a different route.

This long slender sword allows you to roll 2 Attack dice and may be used to attack diagonally. May not be used by the wizard. 250 gold coins

This weapon allows our Bard to attack diagonally from the start of the game. For me this highlights the character’s resourcefulness and allows them to contribute in battle in a crafty manner.

This spell may be cast on any one Hero, excluding yourself. The next time that Hero attacks, they may roll one extra combat die. Regain this spell when any Hero you can “see,” excluding yourself, rolls two white shields when rolling Defend dice.

You and each hero you can “see” each restore up to two Body points that have been lost but does not give a hero more than their starting number.

This spell puts one enemy into a deep sleep so they cannot move, attack, or defend themselves. The spell can be broken at once or on a future turn by the enemy rolling one red die for each of their Mind points. If a 6 is rolled the spell is broken. May not be used against Mummies, Zombies, or Skeletons.

The Bard’s spells focus on helping the other players. I particularly like Inspiring Tale as it assists another player but when they have a spectacular moment on defense it’s the Bard who is moved to tell the tale (and regain the spell).

What do you think? Cast the Far Voice spell and let us know... or just tweet us @HeroQuest